In 1860, tradesmen of Bishop’s Castle met at an inn in Craven Arms to discuss the formation of a

railway to link Bishop’s Castle with Craven Arms. The line from Bishop’s Castle was to run to Lydham Heath, which would be the junction of Craven Arms – Bishop’s Castle line with a line to Montgomery to connect with the Cambrian Railway near Montgomery Station with a short spur running up to Montgomery Town. It was also proposed to form a branch line from Chirbury to Minsterley but due to financial difficulties these two sections were never built.
The Act of Parliament for the construction of the line was obtained in 1861; the company then proceeded to appoint the well known Railway Contractor, Mr Savin, to build the line. Work started but did not proceed very well and it was decided to file a Bill of Chancery against Mr Savin to the amount of £20,500 that had been advanced to him in pursuance of the agreement. The Bishop’s Castle Railway Company won and then proceeded to appoint a local contractor, a Mr W Morris from Plowden, to build the line. This he did and to a high level of workmanship, constructing the line and all bridges to accommodate double track if needed at a later date.

By October 1865 the line was completed and ready for operation subject to receiving approval from the Board of Trade. The line opened for traffic on October 24th 1865 without having completed an inspection by a government inspector and without the required approval being granted. Approval was eventually obtained subject to a number of conditions and the company continued in operation
It was not long before the line was in trouble as the money had run out preventing the construction of the line to Montgomery. On January 23rd 1867, a sale by auction of property belonging to the company was held at the George Hotel in Shrewsbury. The catalogue included two locomotives and all the rolling stock. The rolling stock was purchased by the Midland Wagon Co. who had works in Shrewsbury and had built much of the stock. It was they who, with the debenture holders, appointed a Receiver to run the concern. The Bishop’s Castle Railway Company remained in receivership for 69 years and 2 months until it closed in1935. The Receiver had, by 1935, decided that the line was not paying and so it was time to call it a day. There was not enough money to cover expenses and the defence fund that had been set up was exhausted. Operations were suspended on Saturday, April 20th 1935. All goods waiting transit were cleared with a large amount of round timber included. There were two timber cranes at Bishop’s Castle; one at Plowden and the company’s mobile crane was used at Lydham Heath. This work took a month to complete and the line fell into a state of slumber for approximately six months before demolition commenced at Bishop’s Castle. 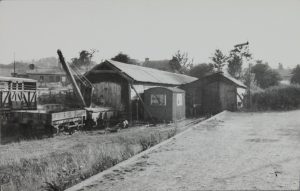 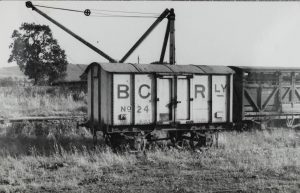 A small staff of five, ex- Bishop’s Castle railwaymen, carried out the demolition work using the loco Carlisle with No.1 (Tankie) having been put into a siding at Plowden to await cutting up. The final demolition train left the line at Stretford Bridge Junction on Sunday 21st February 1937. 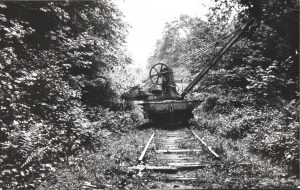 Carlisle was cut up at Craven Arms two weeks later. 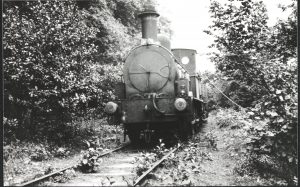 All the scrap metal was purchased by Rollanson & Co. with most of the rails finding their way to Birkenhead where they were used by the Cammel Laird ship yard in the construction of HMS Prince of Wales, a battleship that had distinguished service in WWII before being sunk off Malaya by a Japanese torpedo aircraft on December 10th, 1941.