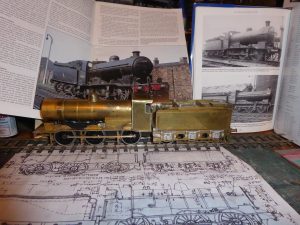 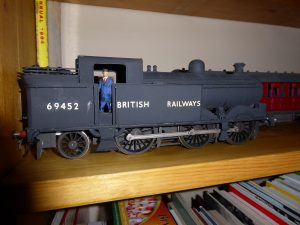 Are there any Railway Modellers within travelling distance of Bishop`s Castle who would be interested in setting up a modelling arm of the BCRS?

I am very happy to have become a recent new member of the BCRS.
At the last open day at the weighbridge Lin asked me for my thoughts on setting up a railway
modelling group which could meet at the weighbridge and take advantage of the facilities
available for community groups which exist there.
I thought it was an excellent idea!
This article in the newsletter is the first step in ascertaining the level of interest from railway
modellers in Bishops Castle and the surrounding area in setting up a modelling arm of the
BCRS.
I am aware that some of the members of the BCRS are also railway modellers and I have already
received an expression of interest from a fellow member of the Gauge 0 Guild in Ludlow.
Lin has also been in contact with an interested person.
Sadly, there is insufficient space within the weighbridge building to construct a club layout but I
envisage members of the railway modelling group meeting to discuss aspects of railway
modelling, exchange ideas and skills and perhaps bring along their models to construct and seek
advice from others.
I am informed that the weighbridge building should be ready to host small meeting groups from
around April next year (Covid permitting, of course).
In the meantime, I would be delighted to receive expressions of interest from anybody who
would like to participate in the setting up of a railway modelling group.
Please email me on satalt17@gmail.com if you would like to become involved.
Thank you
Stuart Taylor 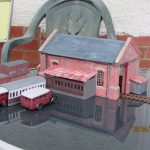 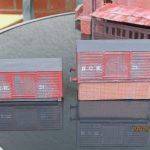 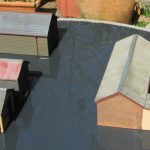 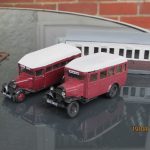 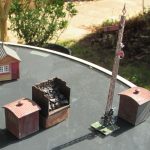 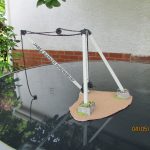 Progress so far – Little shed behind cattle dock, two stores, one for oil and grease I think outside engine shed and one behind the signal for spare candles perhaps? All are various Hornby or Bachmann offerings repainted. None are quite correct but pretty close. Signal is from Model Signal Co parts – should have just a single spectacle frame not a double one (similar signal at Lydham Heath had the double frame spectacle though). Scratch built coal stage from plastic card and balsa plus bits from a Wills coal staith kit. A bit short but not enough space for the full size.
Second set of sheds are the ones on the goods platform. Again a mixture of kits, commercial models and scratch built with various modifications and all repainted.
Still 4 more to make – two van bodies, two coach bodies as bus garages and a permanent Way hut. Photos from British Railways Journal of hut and one from the Stephenson Locomotive Society collection, others unknown.

Have just completed my model of the large timber derrick or more correctly Scotch derrick for Bishop’s Castle Goods platform. It is built from a couple of poorish photos and the Mike’s Models replica that was too big for the space.
After I nearly completed it I found its correct name was a Scotch derrick and someone had made a nice O gauge model of one and the Ballater (Deeside) local history society had restored one. Their website has loads of photos – my gearing is rather off and various other details are a bit off too.
The model was built of plasticard and plastic rodding mainly with gearing from an old Wills platform crane and from an etched brass sheet by Ambris engineering with brass chain from the local model shop. Other bits from the scrap box or from left over bits from kits. The wooden bracing supports are made from laminated coffee stirrers, connected at the top with plasticard brackets and a 10 BA brass screw, which also pivots the jib.
The weight boxes contain lead under the gravel and I’ve put them on a card base with a bit of foam sheet on top that will be grassed over in due course.
Work has now begun on its smaller twin.

This may be of interest to modellers. 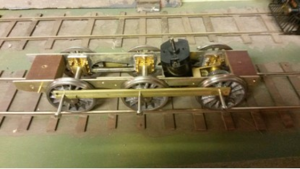 I have recently acquired name and number plates for my 7mm:ft model of Carlisle.
They are in the catalogue of “Thatcher Plates” now sold by Narrow Planet. They were listed under Border Counties Railway – another BCR. The plates are very nicely etched. In fact the letters on the nameplate are probably rather crisper than the original! The plates are a little oversize, the etch measures just over 3 scale inches radially and I measured the original at 2.7. The number plate is also a little oversize but I think acceptable.
In the way of larger “new-builds” the frames have been rolled out (with dummy rods) – the real coupling rods are in manufacture.

Albyn Austin has sent in the following that might be of interest modellers…….

Bishop’s Castle Railway EX-Hull and Barnsley Coach 3D printed
Shapeways, the 3D printing outfit, have on offer under railways the BCR Hull and Barnsley coach produced by a gentleman who trades as Recreation21. It is available in various scales but the 3D printing produces a slightly rough finish which may not be to everybody’s satisfaction. The cost is 52.53 Euros in 4mm, 1/76 scale as the model is printed in Holland. It comes without a floor or handrails etc but does have axle boxes. It might be of interest to members. The code is o-76-bc-hb-3-5-brk-3rd-coach. 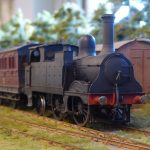 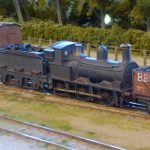 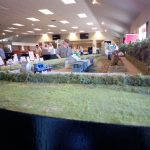 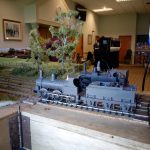 The s gauge layout was well received recently at the CADMRC model railway show at Ludlow Racecourse. In fact we had several requests to take it to other shows! On this occasion we are grateful to David Hemsley BCRS member and Trevor Hughes, Jonathan David and Mark Wigley, all Newtown Model Railway Society members, for operating it throughout the day.
Now here is the problem;
If we are to continue showing it, we will need a team of enthusiastic people who will be willing to collect and transport it to the venue, set up, operate throughout the day, then take down and return it to storage in Craven Arms. Probably a minimum of four people but ideally five or six, two of which would need suitable transport i.e. a small van or estate car. You don`t necessarily have to be a society member, just interested in model railways and willing to help out on a few days per year. It would be entirely up to the team to decide the distance they are prepared to travel and which shows they attend.
If you are interested please contact
John Rimmer on 01588 638998 or email info@bcrailway.co.uk

CRAVEN ARMS AND DISTRICT MODEL RAILWAY CIRCLE  MODEL RAILWAY EXHIBITION AT LUDLOW RACECOURSE BROMFIELD SY8  2BT ON SATURDAY 5th MAY 2018 10am to 4pm MANY LAYOUTS AND DISPLAYS TOGETHER WITH TRADE STANDSLIGHT REFRESHMENTS AVAILABLE ALL DAYAdmission fees:Adults £3.00          Children under 14 FREE if accompanied by an adult Otherwise £2.00

For the first time in a number of years Barry 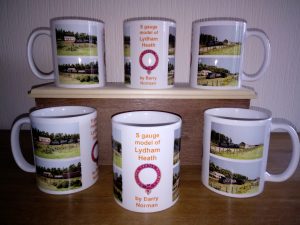 Norman`s Lydham Heath layout will be
running again on the model railway circuit
and it`s first outing will be at the CADMRC
Exhibition on 5th May.
To celebrate it`s return, a “Lydham Heath”
mug has been produced and will be on sale to
the general public at this show.
Priced at £6.95. They are available to BCRS
& CADMRC members now.
Contact Lin: mail@ludfordpark.plus.com

Whilst the society is still the owner of the Lydham Heath layout, following the closure of the museum it has been despatched into the care of Craven Arms Model Railway Circle. It is possible that it may be seen in operation at their next model railway show at Ludlow Racecourse on 5th May 2018. Confirmation will be announced nearer the time. 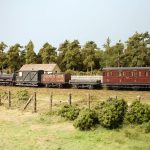 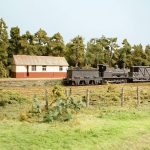 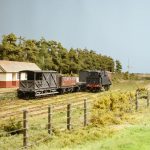 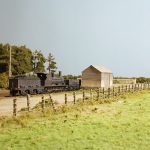 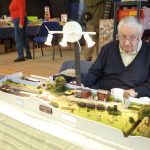 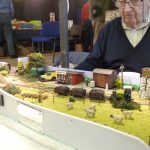 Roger Dalton has produced a plan of the weighbridge office in OO scale suitable for anyne modelling Bishop`s Castle Station.

Albyn Austin has sent in photographs of his excellent model of Bishop`s Castle Station, showing rarely seen images of the right hand side and the back. 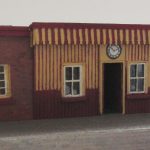 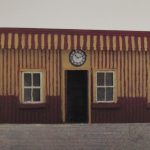 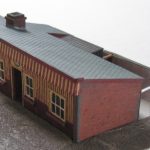 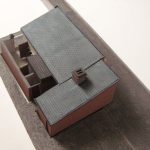 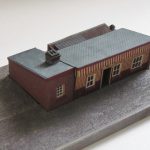 Nick Richardson a modeller from Portsmouth has sent in his interpretations of the BCR locos. 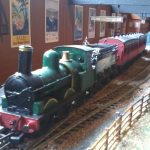 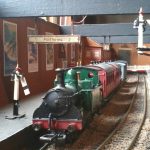 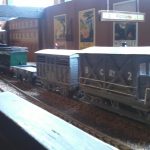 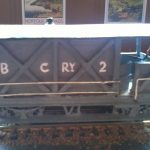 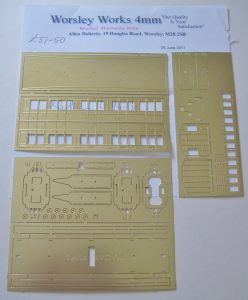 Allen Doherty has kindly produced a coach etch for the BCR ex-LSWR six wheeler.  Etch contains sides, ends, roof, floor, W irons, droplights and louvres for above the doors.  You need to find ventilators, gas lamps, door handles and grab irons, buffers, wheels axleboxes etc, but it is a great help.  My kit is 4mm but I think he could produce it in any scale if asked.  £37-50 including postage.  Cheques to Allen Doherty, Worsley Works, 19 Douglas Road, Worsley, M28 2SR

I have a OO gauge model of Bishop’s Castle under construction.  Track laid – but needs a point sorted out.  6 ft long plus a 4 ft fiddle yard.  Progress glacial in recent times due to other things getting in the way.  I have a SECR all third that is a pretty close replica of the ex H&B coach, in brown teak colour as it would have appeared if the overhaul had been completed.  Also two old LNWR coaches that are nearly finished, a part built B&M coach, bits for an LSWR 6 wheeler, a nearly completed Carlisle, a No. 1 Tankie, a couple of vans, 4 cattle wagons that need lettering – transfers acquired, half built crane wagon and low sided wagon.  A van body for the coal yard, plus some sheds that need painting.  Lots of bits for other things. A kit for the Goods Shed, and plans and bits for station building.  Lot more to do