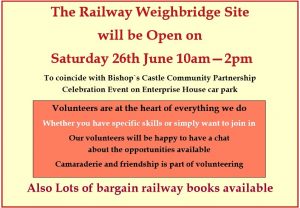 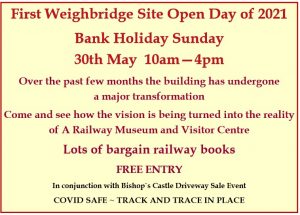 It will be a Zoom meeting and full details of how members can gain access on the night will be included with the AGM Agenda, Directors/Trustees Voting Form, Accounts Report, Annual Reports and any other related documents. All members will receive these documents in the post by 19th March 2021.

This is the members chance to have their say on how the Society is run. Please send any items for the agenda to the Secretary, Mike Boyd  email: thesecretary.bcr@gmail.com 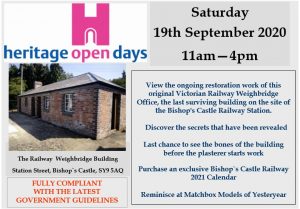 I`m pleased to say that next Saturday`s Heritage Open Day at the weighbridge site will be going ahead. After much discussion and interpretation of the government’s latest guidelines and a thorough risk assessment we are confident that we can open in a Covid secure environment. We hope to see some of you on the day, but if you can`t make it, you can still order a BCR 2021 Calendar to be posted to you. 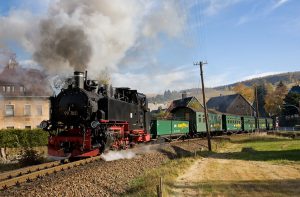 Ron Davies treats us to another of his excellent film shows. This time he ventures into Eastern Europe as we remember the 20th anniversary of the Berlin Wall with a selection of steam from that era. 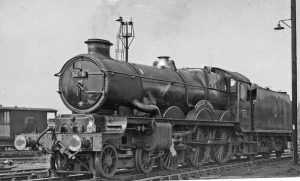 Railway Wanderings with a Camera
Berwyn Stevens
Berwyn visits us again with a further section of his slides. He’s been photographing trains since the fifties and has an extensive collection which covers standard and narrow gauge both at home and abroad. 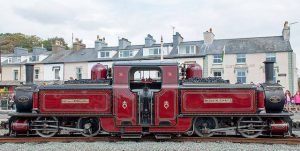 Tim Maynard, of the Ffestiniog Railway Society’s Bristol Group, will take us on a tour of the Ffestiniog and the Welsh Highland Railways. Much more than a travelogue, he will cover the rebuilding of both railways, including some technical content on the locomotives and rolling stock. 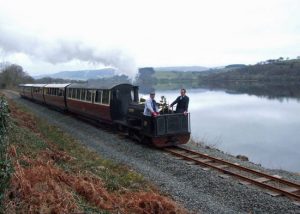 The October meeting of the Society will be on October 4th when the subject will be “The Bala Lake Railway”
Tim Williams will tell the story of the railway and describe the exciting development programme the railway has planned.
As always, we meet at the Methodist Hall, Station Street, Bishop’s Castle and the meeting starts at 7.30.

WHEN TRAINS RAN THROUGH WELSHPOOL 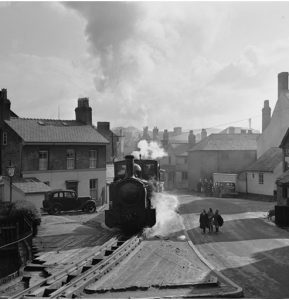 Alan Crowe will take us on a journey through the streets of Welshpool, highlighting the route through the town and contrasting it with what can be seen now. Alan was very involved with the production and installation of the information boards and the town trail in Welshpool which tell this story.

NOTE NO MEETING ON 1st March

The ANNUAL GENERAL MEETING
will be held on Friday 8th March 2019 at 7.30pm at the
METHODIST HALL, STATION STREET, BISHOP`S CASTLE, SY9 5AQ
The agenda will include reports from the current officers and election of officers and committee members for the coming year. Plus an opportunity to hear about the progress made last year and the exciting future of the Society.
This is your opportunity to meet other members and to have your say on how the society is run. Your views are welcomed as every member is an important part of the society.
If you have any items for the agenda, regardless of whether you are able to attend the meeting, please send them as soon as possible to Secretary Peter Mills email: ps.mills@btinternet.com
Refreshments will be available in the interval. 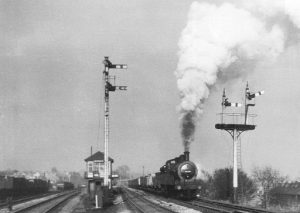 ” Early Travels with a Cine Camera”

Ron Davies joins us for his annual presentation, this time looking at some of his early cine films. Ron has travelled extensively over many years and has a vast library of railway films. His railway knowledge makes for an entertaining evening.
—————————————————————————————- 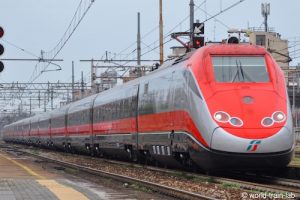 Bob Sweet visits us again to show another selection of his superb photography, this time, on the continent.

Bob has been a regular visitor to Bishop’s Castle and his images appear regularly in the railway press. 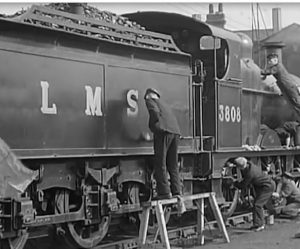 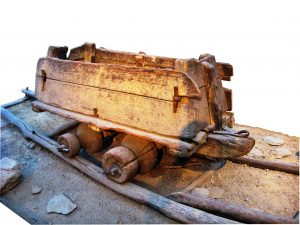 Peter Brown tells the story of early tramways and railways, the precursors of what we have today. We even go back into classical times to see what the Greeks and Romans were up to!

The Monthly Meetings are back!
Friday 7th September 2018 at 7.30pm
Northern Railways in the Days of Steam
Geoff Cryer

Geoff Cryer’s interest in railways began when his grandfather took him, as a young child, to see the steam trains at the local station.

Photo by Geoff Cryer
GWR no. 6000 King George V passes the old Condover railway station on its way home to Hereford, after working a steam special to Shrewsbury

The monthly talks are taking a Summer break and will start again on 7th September. Meanwhile there are lots of events in the coming months. 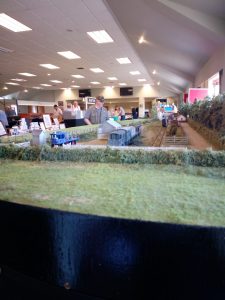 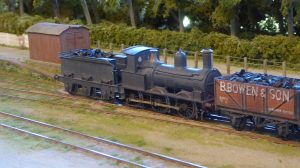 THE SOCIETY LAYOUT LYDHAM HEATH WILL BE APPEARING AT THIS SHOW.

Central Wales Line Trip Saturday 9th June.
Keith Lucas has traditionally organised a trip on the Central Wales Line to Llandrindod in early June and it’s been suggested that we change slightly and make the visit on Saturday 9th June. The train leaves Broome, which is our normal joining point, at 0935 (Craven Arms 0929, Knighton 0953) returning from Llandrindod at 1542. The fare is £7.10 (unless if you have a railcard). If you’re planning to come, you can, of course, just turn up but it would nice to know who’s coming. Just let John Rimmer know and he’ll notify Keith Lucas.

SHREWSBURY RAILWAY HERITAGE TRUST
Abbey Station, 192A Abbey Foregate, Shrewsbury. SY2 6AH
June the 17th
‘Shropshire’s Buses and Lorries’
Working with local enthusiasts, we are celebrating Shropshire’s memories of its bus and lorry services: most of these companies, now long gone. Midland Red and the other rural bus companies will be remembered, together with the wide number of family haulage companies ranging from Parry’s of Bayston Hill to Swains of Stretton and so many others.

A bold new initiative from Welshpool Town Council, the event will celebrate all forms of transport from boats to horses and a wide variety of vehicles – classic; vintage; commercial and agricultural. For more details visit http://welshpooltransportfestival.org.uk/ 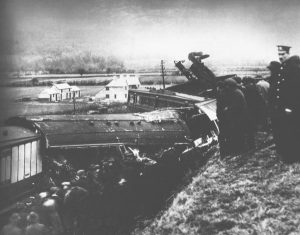 Tom Brady will tell the story of the 1921 Abermule accident.

The Abermule Train crash on the 26th January 1921 involved a head on collision
between a west-bound stopping train from Whitchurch, and an east-bound express
from Aberystwyth. It was caused by a miscommunication between staff, a mistake
which cost 17 lives on that January day. Fifteen passengers, including a director of
the railway, Lord Herbert Vane-Tempest, and the driver and fireman of the stopping
train were killed in the crash.
Both engines involved were 4-4-0 passenger locomotives. 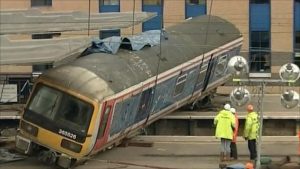 has had a 50 year association with British railways ending his career as a senior manager. In 2005 he chaired the inquiry into the 2002 Potters Bar accident. Tony will talk about his career and describe some of the events that shaped it.

The agenda will include reports from the current officers and election of officers and committee members for the coming year.
Plus an opportunity to hear about our busy year, moving out of the Museum and into The House on Crutches. Also, future plans for the weighbridge project.

This is your opportunity to meet other members and to have your say on how the society is run. Your views are welcomed as every member is an important part of the society.
If you have any items for the agenda, regardless of whether you are able to attend the meeting, please send them as soon as possible to Secretary Peter Mills email: ps.mills@btinternet.com

HOW THE CANAL ALMOST CAME TO BISHOP`S CASTLE

These were both constructed, although not completed as the promoters had originally intended. Funds could initially be raised, but it was two decades of war in foreign lands that delayed construction. With peace came the railways, which led to plans for rural canals to be abandoned forever. The talk will include details of how the canal would have been promoted locally and where it would have been constructed in the vicinity of Bishop’s Castle. 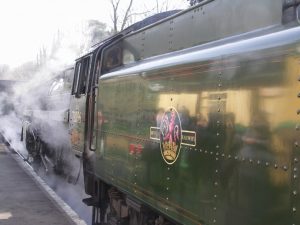 It is always a pleasure to welcome Ron back for the first talk of the new year.        His extensive knowledge of railways guarantees an entertaining and informative evening.