THE BISHOP’S CASTLE RAILWAYS THAT NEVER WERE 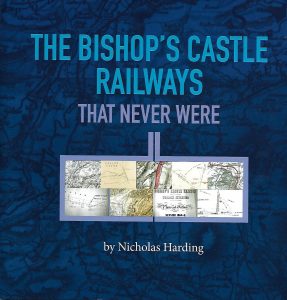 Nick Harding has researched long forgotten railway proposals situated in the Bishop’s Castle area of South Shropshire.
Among the Victorian entrepreneurs who promoted the railways in this book were charlatans, conmen, the deluded, fantasists and the genuine. None of these proposals made it further than a set of plans or a basic idea; none ever saw a spade used or turf turned over. Some cost the promoters a fortune. Some lost everything. The unscrupulous few made a fortune.
A few of these schemes may be familiar, but some have never been examined before and the documents have probably not seen the light of day and seriously studied since the 1860s. Collected together for the first time and generously illustrated with maps diagrams and images, this publication will appeal to all enthusiasts of the BCR and others interested in local railway history.
Nick has been a member of the Bishop’s Castle Railway Society for many years and is also a member of South West Shropshire Historical and Archaeological Society (SWSHAS) for whom he has researched and written several important articles. 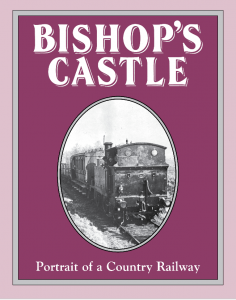 It has been a mammoth task for Peter Broxholme as it has necessitated re typing all the text (about 25000 words) finding a source for all the maps and re setting it digitally. We are very grateful to Craven Print who have re formatted it as a voluntary project. The result is a must for anyone interested in the detail of the Bishop`s Castle Railway.

A PICTORIAL PRESENTATION by Ken Lucas 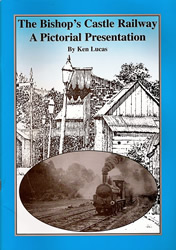 massive collection. They present an attractive profile of the railway, in its early years and towards the end when the advent of bus travel signalled its demise.
Mr Lucas argues, and who could doubt him, that in a county famed for the variety of it’s early railways, from the great joint station and engine sheds at Shrewsbury, to small branches and industrial lines, the Bishop’s Castle Railway was truly unique.
Of all the minor railways across the UK, the BCR, a railway where time pressures were at a minimum, was a subject to be pictured by hundreds of rail enthusiasts. It is not stretching things to say that for its size and location it was probably one of the most photographed lines in the country. 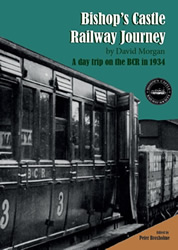 BISHOP`S CASTLE RAILWAY JOURNEY  by David Morgan
In July 2011 the family of the late David Morgan presented the manuscript of the main body of this work to The Bishop’s Castle Railway Society. Written by him in 1934 it traces his journey on the Bishop’s Castle Railway one Friday in April of that year. Eyewitness accounts of the Bishop’s Castle Railway are well known, but what makes this different is the detail and thoroughness with which it was written, and the budding railwayman’s eye for detail.
David Morgan got the chance to see the railway close up in all its decrepit glory when in the spring of 1934 he travelled from Birmingham to visit the Bishop’s Castle Railway. He was only sixteen at the time and yet to follow his career in railway engineering. We can only guess at how he got to know about the Bishop’s Castle Railway, but by 1934 its reputation in railway circles must have been well known. Craven Arms would have been an easy journey for a youth of sixteen, probably travelling to Shrewsbury, then changing to the Shrewsbury to Hereford line to reach Craven Arms in good time. He wrote this account following his visit, not only the copious notes and descriptions, but all the drawings and sketches as well. This was all typed and bound in a hard cover, and with several pictures he took with his box brownie camera.
Perhaps it was written as a school or college project, perhaps just for his own enjoyment. We shall never know. Fortunately after David passed away his family had the foresight to keep it safe and eventually it was kindly donated to the Bishop’s Castle Railway Society. Thus it was saved from the fate of so many similar documents, namely the skip or rubbish dump. The original now safely resides in the Bishop’s Castle Heritage Resource Centre, but the Society felt that the wider public should have the opportunity to share David’s memories and interest in the Bishop’s Castle Railway. So jump on board the “Castle” train and join David Morgan on his trip down the Onny Valley. 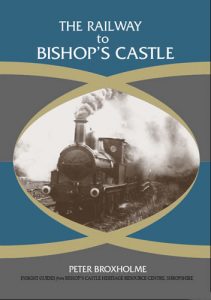